28 des. The man of the noses – A Catalan legendary story

The Man Of The Nose or in catalan “home dels nassos” is without any doubt one of the most legendary characters of the Catalan mythology,  whose legend  extends to others places such as La Rioja, Teruel, Navarra, Mallorca, etc. It is said, this character has as many noses (elsewhere also they attribute eyes or ears) as the remaining days of the year; which means that on the 1st of January he has 365 noses. Every passing day he loses a nose, and you might only see him on the 31st of December.

According to the folklorist Joan Amades, the man’s nose seems to be a degeneration of a mythical character who symbolized the year. Traditionally, adults often explain to children that the last day of the year comes the man of the nose and they usually imagine a scruffy character with 365 noses in his face, without thinking that December 31 he has just one nose left. 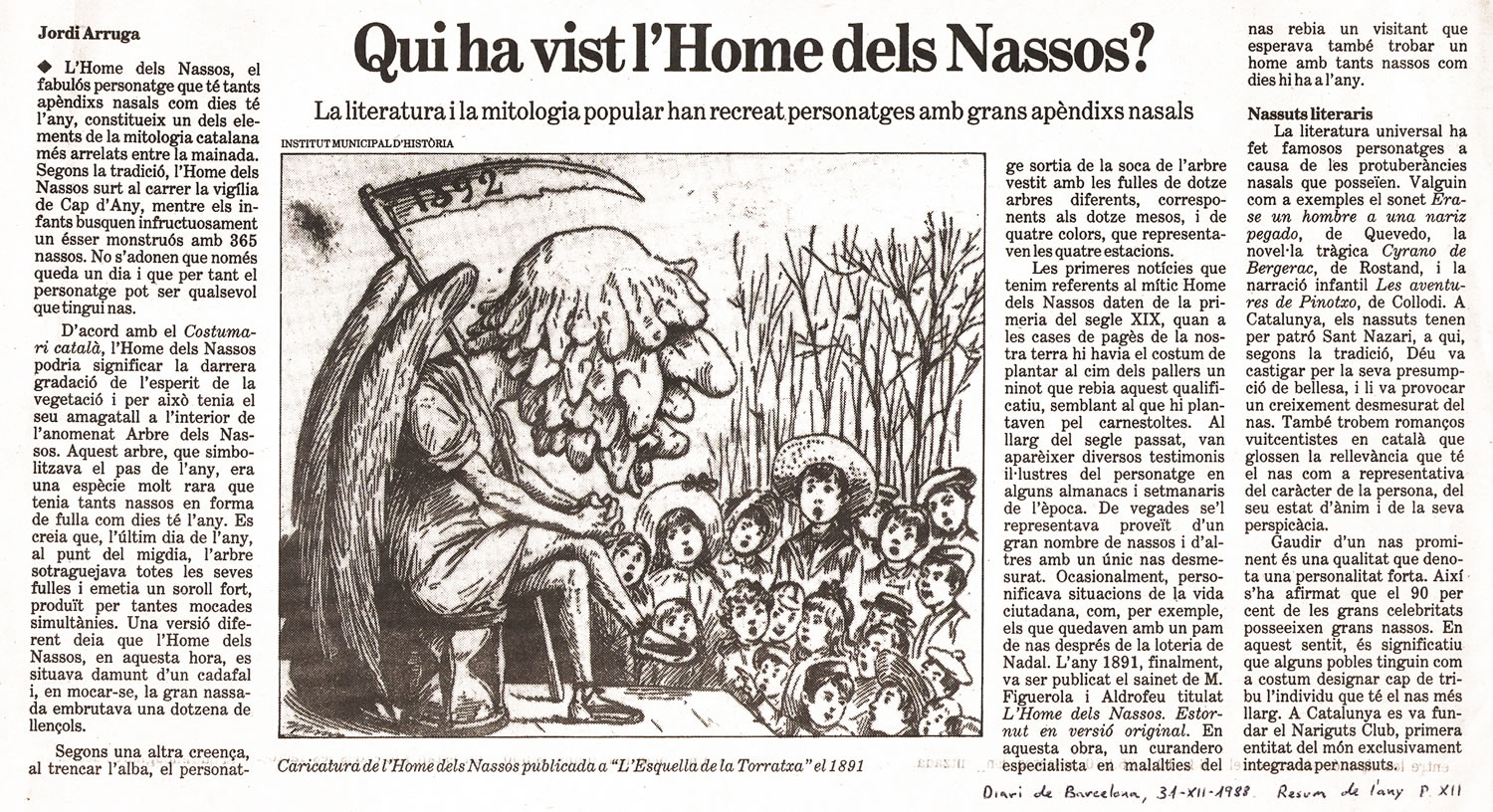 To complete the joke, some people on the streets use to say that they had just seen him passing by through a nearby street with the intention of make the children run to see if they can find him. In smaller towns, it was said, this character used to appear in the church to drink the holy water fountain.

In Barcelona it was a tradition finding him at 12 o’clock on December 31 in the Pla del Palau, opposite to the Llotja, on a platform so that everyone could see him covered with a few dozen sheets to cover the 365 noses that were supposed to have all around the body, as they could not fit in the face.

So, on December 31 is the day that in many Catalan towns you can see the “Home dels Nassos”. This is certainly a fascinating story, until you realize that the last day the man’s nose can only have one nose left and it could be anyone.

In Barcelona usually hang out at various points in the city and some people, to maintain this tradition, use fake noses in his honor. It is an act that has remained until our days and sets the first act of the New Year in our town. The arrival of the singular character is an act aimed at children; however it is the perfect excuse for parents, uncles, grandparents … to go out and congratulate the New Year to all friends and family members who have not yet had the opportunity to see each other.

Don’t miss this unique opportunity to meet this mysterious character in you are around Barcelona during these days! 🙂